There Is a Free Lunch, After All. It’s at the Office.

Everyone who works at Ben & Jerry’s headquarters in Burlington, Vt., is entitled to three free pints of ice cream for each day of work. At the American Enterprise Institute, a conservative think tank in Washington, employees are treated daily to an elaborate buffet with appropriately white-shoe fare like prime rib, crab cakes and housemade beignets.

And at the offices of the Perkins Eastman architecture firm, with locations on three continents, staff members can enjoy all manner of free snacks — just as long as they are orange, the color of the company’s logo. In New York, that means a lot of Cheetos, Goldfish and Nacho Cheese Doritos.

Free food has been a formidable presence in the American workplace since the 1990s, when Bloomberg and tech start-ups like Google began to put out snacks in hopes of making employees happier or healthier, more productive and less likely to stray far from the task at hand.

But today, the practice is almost obligatory, as businesses go to extraordinary lengths to provide food without charge, or at a sharp discount. The offerings have grown in size, scope and specificity — some tailored to a company’s mission, others unwittingly reflective of it and still others that seem oddly random.

The dating app Hinge uses edible perks strategically: Employees in its New York office get $200 a month to spend on dates, which often involve food. The company’s founder, Justin McLeod, said his favorite use of the benefit was a cat-themed date that one employee planned.

“They started at a cat cafe,” he recalled. “They went to Katz’s and got Reubens, they went to the grocery store and tried to find cat-themed food, and then tried to make cat-shaped stuff on a plate while watching ‘Cat on a Hot Tin Roof.’”

Hinge also gives away nutritious snacks like yogurt and nuts, because Mr. McLeod, 34, sees his company as the health-food version of online dating, providing more information about each potential date than rival apps where users swipe quickly though photos. “With the fast-food approach, the whole experience feels good in the moment, but not so good in the end,” he said.

There are workplaces where the food gifts have a competitive feel. Zappos, the online shoe retailer, holds periodic eating contests in its main plaza in Las Vegas. More than 300 employees show up to cheer.

Big Ass Fans, a fan producer in Lexington, Ky., has a beer refrigerator that is unlocked only if the day’s sales goals have been met. “We’ll walk through other departments, and they will ask: ‘How close are we? Are we going to hit it?’” said John Nunnelley, 29, who works in sales.

Fidelity, the financial services company, also dangles food as an incentive. The items aren’t free, but can come with a significant price break, determined by its perceived healthfulness. A grilled Buffalo chicken wrap might be half the price of the breaded and fried version.

A spokeswoman said the strategy has been successful: Nearly two-thirds of the food items purchased every month are what the company deems healthy, a 140 percent increase since the program was introduced in 2012.

Many food businesses offer employees only their own products. Rachel Drori, 36, the founder of the subscription food-delivery company Daily Harvest, said that filling the office refrigerators with free Daily Harvest smoothies and soups is a convenient way to gauge the popularity of new items.

“We just launched a kelp pad thai, and yesterday we didn’t have enough for everybody,” Ms. Drori said. “It was anarchy.”

At Ben & Jerry’s, in addition to three daily pints of ice cream, employees have an on-site gym to work off what they have come to call the “Ben 10.”

Are they bothered that the only choice for satisfying afternoon hunger pangs is a high-calorie dessert, rather than something more nutritious? “Not really,” said Sean Slattery, 28, a social and digital insight analyst who gained those 10 pounds in his first few months at the company. “I wouldn’t really expect that.”

The ice cream is available to anyone who wants it, in an unlocked refrigerator governed by the honor system. Still, some workers resist the three-pint temptation. “Only the newbies take them every day,” said Laura Peterson, a public relations manager. “You soon learn to space it out a bit.”

Not every company’s offerings are as goal-oriented. Thrillist, an internet guide to food, travel and entertainment, supplies unlimited cinnamon-raisin bread to workers in its New York office — simply because it was put out once, about five years ago, and proved immensely popular. Six toasters are on standby, so no one has to compete for a warm snack.

The media company Slate is well-known for the sheer glut of junk foods served in its Brooklyn office; among the most popular are Pop-Tarts and Slim Jims. There is fruit in the pantry, but it “will stay and rot,” said Jayson De Leon, 27, a senior producer of Slate’s podcasts. “It’s such a sad depiction of our diets in the office: the apple rotting.”

Still, he added: “I like a Pop-Tart. I like a Slim Jim. Something salty and something sugary. An apple is not going to help me get through this.” There’s even a special emoji on the company Slack channel that is sent out when the office manager restocks the pantry.

Box, a file-hosting platform, serves locally made snacks, like It’s It ice cream sandwiches in its headquarters in Redwood City, Calif., and beer from the popular Jester King Brewery in its Austin office. (Notably missing from the Austin branch is the cult favorite sparkling water Topo Chico, despite repeated employee requests, said Michelle Mattern, 33, a senior implementations consultant.)

Airbnb has what it calls a “simple station” in its San Francisco headquarters with plain, unseasoned meats, grains and vegetables. The company would not explain the starkness of the food, but a spokesman for LinkedIn, which has similar stations in its offices in San Francisco and Sunnyvale, Calif., said it appealed to the many people with dietary restrictions.

LinkedIn, which doesn’t charge for food even in its cafeterias, also provides several halal-meat options to cater to Muslim employees at its Bay Area campuses. For Eid al-Adha last summer, one cafeteria served a Middle Eastern spread.

“It’s one of the reasons I have been at LinkedIn for four years,” said Omar Al-Ghwairi, 34, a senior technical services manager.

The prime rib and beignets at the American Enterprise Institute may seem inevitable for a research group that extols the rewards of a free market, but there also less fancy choices like deli meats and eggs. “I wouldn’t call it elaborate,” a company spokeswoman said. “I would call it everyday food.”

Rosemary Newsome, 22, a development intern, is thrilled with the spread. “I do kind of joke that now that I have this, I can’t go back to anything less,” she said.

Some company food policies have drawn mixed reviews. In July, a media uproar ensued after the shared-workspace company WeWork announced that it would no longer serve meat at its offices and events, and wouldn’t let employees expense meals that included red meat, poultry or pork.

A similar policy proved untenable at Google; after the company tried to establish meatless Mondays at its cafeterias in 2010, employees rebelled by tossing out silverware and holding protest barbecues.

Amazon, which prides itself on its culture of frugality, doesn’t offer any free food in its Seattle home base. But a spokeswoman said the reason the company has refrained is its desire to encourage workers to patronize local food businesses. The company says it will follow a similar policy at the new campus it plans to build in Long Island City, Queens.

At the companies that do give freebies, there are countless challenges for the people charged with producing them. Tilak Gurung, 49, who was a chef at Dropbox’s San Francisco headquarters from 2012 to 2017, said he wasn’t allowed to repeat the same menu twice.

Mr. Gurung also lamented having to participate in corporate culture. “You have to write your own reviews about your weaknesses — the manager writes about me and submits it,” he said. “But I am a cook! I have to cook!” He eventually left to start a restaurant, Tilak, in the city.

Corporate kitchens also have to deal with “skyrocketing” dietary restrictions and highly critical consumers, said Amelia Ekus, 29, a manager for New York and New Jersey at the corporate food supplier Guckenheimer, and formerly a general manager of the cafeteria in Twitter’s New York offices.

“With restaurants, people vote with their wallets,” she said. But when the office cafeteria is the only food option, “if they don’t like what you do, they will tell you every day how they think you should get better.”

Still, Ms. Ekus added, she understands why companies are going all in on food: Compared with other benefits, it’s a small investment, “and the return on the investment is huge,” she said. “You reduce turnover because you have happier employees. It’s how you stay competitive for a certain sector of companies.” 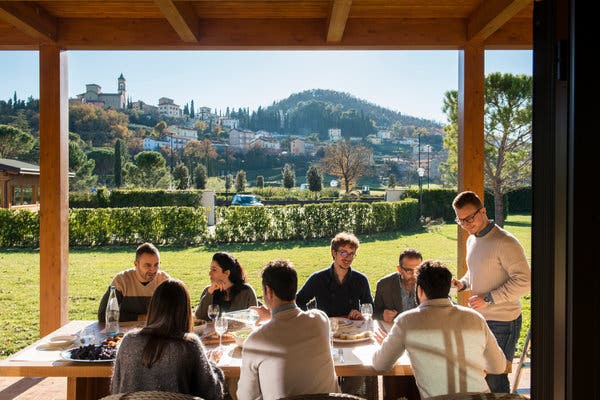 At the headquarters of the Italian designer Brunello Cucinelli in Solomeo, Italy, employees enjoy a low-cost, multicourse lunch that might include pasta with tomatoes and basil, and bread topped with fresh mozzarella. CreditSusan Wright for The New York Times

The designer Brunello Cucinelli doesn’t understand all the fuss. He has been feeding his employees in Italy for a nominal fee (currently 3.20 euros) since he founded his label in 1978.

At the company’s hilltop headquarters in the ancient hamlet of Solomeo, Italy, the roughly 1,000 employees enjoy a multicourse lunch that might include pasta with tomatoes and basil, and bread topped with fresh mozzarella. They sit at long tables in a high-ceilinged courtyard with sweeping vistas of the city.

By taking time for a midday meal, “you can better focus your thoughts and your life,” Mr. Cucinelli said. “It makes people more productive.”He recently visited the cafeteria at Apple’s headquarters in Cupertino, Calif. “It was a very nice experience,” he said, from the design of the wooden tables to the freshness of the sushi.

But there was one big difference from his lunches in Italy: Most of the employees were on their phones.
A version of this article appears in print on Jan. 9, 2019, on Page D1 of the New York edition with the headline: There Is a Free Lunch: It’s at the Office.
Order Reprints | Today’s Paper | Subscribe

You have Successfully Subscribed!